This article is part of a series focused on the Seven Elements of Needs Analysis. The Elements are: Curriculum Mapping, Know/Do/Believe, Defining the Audience, Designing a Learning Brand, Defining the Return on Investment, Building the Team, and Scoping the Project. 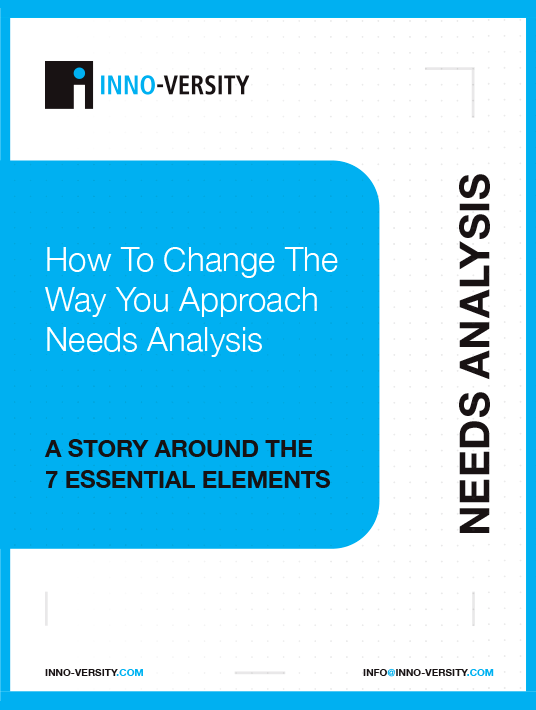 How To Change The Way You Approach Needs Analysis: A Story Around The 7 Essential Elements

How does the fictional company AshCom adapt to change and devise innovative L&D solutions? Discover the seven crucial components of successful needs analysis.

What you are about to read is a fable. The company, AshCom, is fictional, but the learning challenges faced by Kathryn, AshCom’s CLO, and her team are real and commonly shared by learning teams in corporations, non-profits, associations, and education.  It is our hope that you will be able to connect with the characters, their challenges, and the solutions they discover.  Building and following a Needs Analysis system is vital to the success of the learning opportunities we create.

If you would like to read the entire series, it can be found HERE.

AshCom was a small manufacturing company. It stood in the shadows of some of the world’s top manufacturers in downtown Minneapolis, Minnesota. The logos of large corporations, like General Mills, 3M, Cargill, and Medtronic, stretched across towering buildings that lit the Twin Cities skyline. AshCom, under those bright lights, had emerged as an important part of the manufacturing scene and supplied products to several of their giant neighbors.

AshCom’s growth came over several decades, having started in the 1950s by the Ash family. Over time, they added different products, processes, and people until they became a company with a diverse line of business and almost 4,500 workers across eight states.

As the company grew, so did AshCom’s commitment to the training and development of its team members. The learning team responsible for developing the knowledge and skills of the company grew organically too.

The Key Players In Curriculum Design

Maggie was the first person solely dedicated to learning. She graduated with a focus in human relations – longer ago than she cared to admit – and later added a master’s in instructional design. She had been with AshCom for nearly 20 years, growing into her role as Senior Instructional Designer.

Others were added as the company expanded. Kathryn came from the learning team at 3M and became the Chief Learning Officer of AshCom four years prior. She certainly understood learning science, but her primary role was to direct and oversee. Kathryn was more system focused than anyone else on her team.

Alishia was young and a recent graduate of an instructional design program. What she lacked in experience, she more than made up for in enthusiasm. Fresh from the classroom, she was their go-to techie guru who kept them on top of the latest developments and technology trends in L&D.

Michael served more as an advisor to Kathryn. A former college professor with experience in higher ed administration, Michael was helpful in building strategy. He was a wealth of knowledge.
Amy was not technically an employee of AshCom, but she was a trusted member of the team. Kathryn brought her on as an ongoing eLearning consultant. Kathryn knew that Amy worked with many other clients, but she saw this as a strength because Amy could instantly benchmark what other companies—manufacturers and non-manufacturers—were doing in their L&D teams.

Kathryn’s team functioned well. They were in the third year of a five-year plan that was clear and had a budget concisely carved out to accomplish its objectives. The main goal each year was to update 10% of their learning assets and make them available in a digital format.

Alishia and Michael pushed for a blended learning approach to education, where learning could be delivered face-to-face, online, or using a combination of the two. It took a little convincing at first with the CFO, who thought it might double the price. But the learning team presented a proof of concept that showed greatly increased flexibility with minimal budget impact. Their point was made, and the plan was approved. Things were steady and predictable.

All that changed very quickly with the first acquisition in the history of AshCom. Globex Inc, despite its impressive name, was smaller than AshCom with 2,500 team members in three locations. The combined company would total more than 6,000 people operating in 11 plants across nine states. The learning team heard the rumors months ago of a possible acquisition, but their minds were on other things until an early morning announcement was made one Tuesday in September.

Kathryn left the C-Suite meeting with her head spinning. The acquisition was complete. More people. More locations. Now 4,500 people would have to learn to work with 2,500 new people. And 2,500 people would need to learn how to do things the AshCom way. Both cultures had systems and training platforms. Globex was further down the road in their transition to digital learning—about 50% of their offerings—but their systems and some of their standard operating procedures were quite different from those of AshCom.

Back in her office, Kathryn sat in silence. She loved a good challenge, but she felt like someone had just stacked a pile of books from two different libraries in her office and then asked her to organize the chaos, keeping the treasures and disposing of redundancies or outdated material. She took a few deep breaths, put on her game face, and Slacked her team telling them to drop what they were doing and meet her in 15 minutes.

By the time her team arrived in the conference room, the news had already spread. Maggie, Alishia, Michael and Amy joined Kathryn. Alishia smiled. Maggie looked concerned. Amy had an expression that said she was focused, and Michael appeared unaffected (a skill he developed over years of academic meetings).

Kathryn spoke first. “Looks like you’ve all heard the news but let me make it official. We have acquired Globex, and we are to start bringing together our teams as quickly as possible. Leadership was direct in tasking L&D to be out front in the initiative and a key part of making this work. I haven’t been given a budget yet, but I was told we would have what we need, within reason. We need to integrate two training systems, and we need to make a complete transition to digital learning. And we need to do it as quickly as possible.”

Everyone in the room realized immediately that their current five-year plan was dead. Maggie, who had been at AshCom the longest, hung her head but just slightly. After a moment of silence, Alishia spoke first. “So, now what?”

Normally, Amy was intentional about speaking last or not at all. Her role as a consultant was often to listen carefully and summarize what she heard back to her clients. This time, she spoke with more force than the others were used to hearing from her. “We need to do a needs analysis. What we need first is a curriculum map.”

At this, Michael sat up straight. “Yes!” he said. “That’s right. Amy, have you done curriculum mapping with other clients?”

Amy responded that she had and that her experience was that when things were complex and even confusing, the curriculum map was the first step.

This was all Michael needed to hear. His typical authoritative tone was replaced with an unrestrained enthusiasm. He truly wanted to share what he knew. “The word ‘curriculum’ is Latin, and it means something like a course, a path, or a road. Curriculum mapping has been done in schools at all levels for decades, but it applies well to our company.”

Alishia jumped in, continuing his thoughts. “I remember one of my professors walking us through it. She said the goal was to make something visible. Seeing the way forward is the key. It is all about visibility in large systems so that we know which way to go.”

Kathryn’s project management skills kicked in. “If the goal is to make things visible, then let’s make curriculum mapping visible so we are all on the same page.” She grabbed several stacks of sticky notes from the counter and handed a stack to each person in the room. “Please write a word or two describing what you think are the key attributes of curriculum mapping and put them on the white board.”

Kathryn smiled. Her team seemed to be on the same page.

She then did something typical for her and anticipated by the others. She reversed the question and asked them to say out loud what pitfalls they were trying to avoid by curriculum mapping. Taking turns, each person called out one possible peril:

Kathryn thought for a moment and said, “This looks like something I went through a few years ago when we built our house. We had a bunch of ideas and even some rough sketches, but Bill and I didn’t really have a solid plan. We met with an architect who spent quite a bit of time asking us questions and giving feedback. At the end of the process, we could see what we were going to build. I mean, actually see it! We took a virtual tour of our house design with his software. That helped us to organize and clarified our goals for our family. It was not yet a detailed blueprint, but it gave us a good place to begin.”

Michael agreed. “Sometimes the information is put into a table or a spreadsheet. If we can get a little more creative, we might be able to make it even more visible. But you are right. This is where we need to begin.”

Kathryn knew that they had other meetings on their schedules, so she asked the learning team to clear their calendars for Friday morning. Her assignment was simple. Instead of coming back with their own version of a curriculum map, she asked them to come back with a list of questions that had to be answered by the curriculum mapping process they were about to begin.

Friday’s meeting was productive and took less time than expected. Everyone contributed and several people posed similar questions. Once on the whiteboard, they grouped their questions and came to agreement on common language for each question.

After a little discussion, they decided to enter the questions and their eventual answers into a shared spreadsheet. Once that was complete, they would consider additional visual representations of their plan. Each person was assigned to a team, depending on their expertise, and tasked with answering a specific set of questions.

They would report back their findings two weeks later. They all knew that the final answers would take a little longer and some additional clarifying questions might be added, but when the curriculum mapping process was complete, they would have a plan, alignment, and they would be able to clearly see what they needed to do next.

To read the rest of the chapters in this series on Needs Analysis and to see Kathryn and her team take on the other Essentials, please download the eBook How To Change The Way You Approach Needs Analysis: A Story Around The 7 Essential Elements.

Inno-Versity creates custom elearning for some of the largest companies in the world. We remove complexity from critical elearning projects. We are an in-house team of talented and experienced instructional designers, artists, and learning experts.