Almost everyone has played one type of card game or another, from Poker to Solitaire to Uno to one of the most popular Kickstarter projects ever—the card game Exploding Kittens. And card games are not just for adults either. Children play card games as well, from Go Fish to Slap Jack to Old Maid. Card games are a favorite pastime for people of all ages.

Card games have even made their way into the cultural zeitgeist with games like Cards Against Humanity and Black Jack. Almost every James Bond movie contains a card game of some sort. People even watch other people play card games for entertainment. Poker games were first broadcast on television way back in the 1970s, and the game show “Card Sharks” featured players interacting with oversized playing cards while the Great Britain show “Play Your Cards Right” ran for 16 seasons. Cards are an integral part of our lives.

With the pandemic, many card games have now gone digital. You’ve been able to play digital poker with real money online since 1998 and can even play Cards Against Humanity online. With the push to “online everything,” it’s now possible to design, create, and deliver online, digital card games for learning.

One method is to use some of the animations of PowerPoint and clever artwork to provide the look and feel of a card game. The presentation tool Prezi has a card game template and you can even use traditional eLearning development tools to create digital versions of solitary card games.

Additionally, one growing area for digital card games is the availability of online tools for creating group card games for learning. These game platforms mimic the feeling of everyone sitting around the same table playing the game because they are multiplayer.

These multiplayer digital card games allow players to take turns, react to others in chat or audio/video, and have their own private hand that other players cannot see, along with a community area where played cards can be observed. Many of these digital card platforms are compatible with popular video conferencing software so that no matter what platform you use, learners can interact as if they are in the same room playing cards against each other. These platforms seem to work well for creating the feeling of having a live, face-to-face card game—only these are over a distance.

Adding Cards To Your eLearning Toolkit 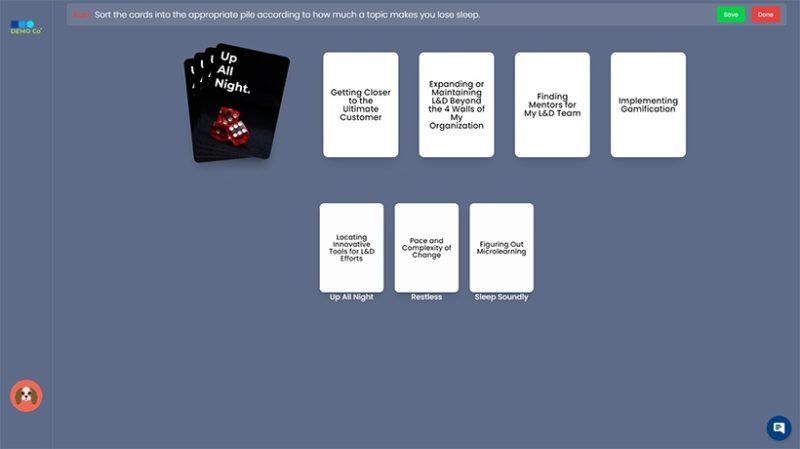 The popularity of card games is one reason why using card games in your eLearning design can be effective in developing impactful learning. As a Learning and Development professional, it’s possible to leverage the learner’s prior knowledge of card games to present effective and impactful instruction.

With a card game, most learners will already know the basics, they’ll understand the concept of a deck of cards, drawing cards from the deck, and discarding cards. The terms, rules, and concepts are well known and don’t require a great deal of cognitive overload. Even if one person has never played cards before, it’s most likely that some learner in the group has and that person can help those who have not. Because of the prior knowledge of “how to play,” learners can focus on the game.

Unfortunately, this is not always the case with more involved multiplayer learning games or games based on video game conventions. While a few folks might understand the terms like class, game master, and hit points, those concepts are not as universal as the concepts associated with card games.

Using a card game as your instructional framework doesn’t mean you have to be trapped into thinking you need to use cards that contain numbers and traditional suits such as Hearts, Spades, Clubs, and Diamonds. Instead, think of games like Apples to Apples or Cards Against Humanity which contain statements, words, and even paragraphs that are an integral part of the gameplay. You don’t need to be confined to traditional designs, use your imagination to create scenarios or roles. Think of how you can or provide other information the learner might need to match, react to, or even analyze. And, with digital card games, it’s often possible to add images, video, and even audio to the cards themselves.

A card game platform that allows for multiple players allows you to provide a fun, interactive environment that can be used to disguise role-plays as a card game, provides a shared experience for learners and, if facilitated properly, can provide a rich conversation that can lead to meaningful learning outcomes. A multiplayer card game can also bring a sense of community and social interactions that are sometimes lost over distances.

What Can Card Games Teach?

Now that we’ve established that card games can be valuable tools for learning, let’s discuss a few of the concepts that can be taught with a card game.

One way to encourage critical thinking is to ask a question that requires deductive reasoning or provide learners with a chance to overcome an objection or to make connections between two or more items that don’t seem connected. This can easily be accomplished with a card game where you ask a learner a scenario in the form of a critical question and then ask them to explain how they would react. The other players can listen to the explanation and then challenge the first player’s logic or provide evidence of why the concept is incorrect. The idea is that a critical question is posed and other players need to react. The learning is when you debrief the reactions and the reasoning.

An important part of problem-solving happens to be classifying the problem correctly. If you don’t know the type of problem, it can be hard to solve that particular problem. In this case, you can use a sorting game where the learner is required to read a problem, recognize the type of problem, and sort it into the correct category. While the game mechanics might seem straight forward, the act of analyzing the problem written on the card and then properly thinking through which pile it should be sorted into provides an effective method of practicing and reinforcing problem identification skills.

Representing A Product Or Service

Many organizations have a sales model and certain phrases or talking points salespeople or others should say to a potential client. What is missing often are the exact words or phrases to say in unique or specific situations. One way organizations overcome this is to create a role-play exercise. This can lead to moans and groans from the learner. An alternative is to create a card game where the learner must overturn a card containing a sales scenario, act out the scenario, and then the other learners provide feedback in terms of scoring the first learner’s performance. The better the performance, the more points the learner scores. This allows the learner to practice but also provides the other learners a chance to listen to how a fellow salesperson would interact with a customer in a given situation.

Having used a digital, multiplayer card game in my graduate class to teach skills related to debriefing a Subject Matter Expert, I can tell you that the learners were enthusiastic, had fun, and learned the content contained in the game. One learner even commented that this was the best social experience he’s had online in months. Card games tap into a type of nostalgia but they also tap into a key area of learning from critical thinking to problem-solving to observing how others represent your organization’s products and services.

So next time someone asks you about creating an innovative, engaging eLearning experience, consider the humble but effective concept of a deck of cards. The results will surprise you.