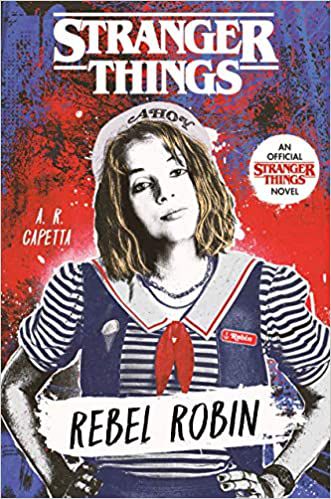 It’s the beginning of sophomore year, and Robin’s Odd Squad friends have decided: this time, they’re going to fit in. They couple up, they won’t stop talking about college and their future careers, and they’re obsessed with trying to act “normal.” Robin knows that game well — she’s been pretending for years, hoping nobody would notice the sarcastic polyglot French horn player with a bad perm in the back of the room. But there’s one aspect of her identity that she knows for sure doesn’t fit in with her carefully controlled image — something she’s only just now realizing: Robin likes girls.

How exactly is she supposed to be her true self in teeny-tiny Hawkins, Indiana? Robin is convinced the only way she can experience real life is by fleeing to Europe for the summer — aka Operation Croissant. But she has no money, no permission, and no one to share the adventure with — and it will take a heck of a lot more than that to escape Hawkins in one piece.

Sprinkled with references to your favorite Stranger Things characters, this prequel chronicles one girl’s realization that the only person she really needs to be accepted by is herself.

Reasons to read it: I’m obviously biased in including this one. I like Stranger Things, and Robin was a stand-out character for me (of course). A.R. Capetta is also one of my favorite YA authors, especially their books The Lost Coast and Once & Future, so I was bound to be excited about this one. Even better, there’s an accompanying podcast voiced by the actor!